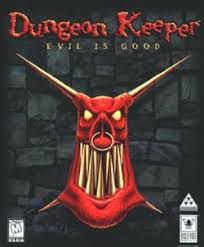 Dungeon Keeper launched in the United States on June 26th, 1997.  I don't know how, at ten years old, I came across this garish, vile, and extremely fun game, but I did and I thoroughly enjoyed it.  Its unique game play has left me craving games like it. Sixteen years later and I still like to boot the game up once and a while just for old times sake.  Dungeon Keeper was well received when it was launched back in the 90's but through the years I've often brought it up in conversation and no one seems to remember it.  What about the game made Dungeon Keeper continuously stick out in my mind?  Why did I love it so much?


Dungeon Keeper begins with a gruesome video intro of a hero passing by a town's pub and setting off towards the dungeons beneath a nearby ruined castle.  The hero does well against the little goblin workers, but is quickly beheaded when he meets a Bile Demon after taking a little treasure for himself.  This scene and it's wonderful music sets the tone for the game.  The game then transitions into the first level, which holds the players hand and does a great job of introducing you to everything you'll need to know in order to make your dungeon the creepiest in the land.  The narrator's voice really adds a lot to the atmosphere.

Dungeon Keeper is not a dungeon crawler.  Instead, its a simulation and top down strategy game in which the main goal is to build up your demon armies until you attract heroes who will try to destroy your dungeon; specifically by destroying the dungeon heart.  Defeat enough hero waves and eventually the lord of the land will make a visit to your dungeon.  After you defeat the lord, you'll move on to the next dungeon which will of course have more demons, harder heroes, and new abilities as one would expect. 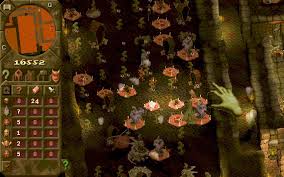 With all good games comes the inevitable question of, "where is the sequel? ".  In fact, Dungeon Keeper has had two.  Dungeon Keeper 2 was developed by Bullfrog, the same studio who created the first.  The game reviewed well on multiple sites.  In fact it received editor's choice on IGN.  The latter remake, Dungeons, was released in 2011 and prompted me to write this article   I did attempt to play this game but after a few hours I uninstalled it.  The game was not worth the hard drive space it was inhabiting    With a Metacritic score of 65 (compared to the high 80's/90's of the first 2 games) the media world seems to agree.  Grab a copy of Dungeon Keeper or Dungeon Keeper 2 over at GOG.com currently on sale for Christmas. As long as you can deal with the dated graphics, I guarantee you'll enjoy it.