At level 36 and nearly forty hours into Guild Wars 2, I think I can safely say I've got a firm grasp of what the game offers at this point and what it does not. I've had some revelatory moments as well as some ho-hum events. Here's what I think so far...
I can confirm that even for the second tier of crafting items (iron for armorsmithing) you still need to go back to previous areas for materials. While you can usually travel to other areas that aren't your races, it still seems like an odd choice. This really seems contrary to ArenaNet's generally non-grindy game design. Luckily I am crafting items that are sometimes upgrades by comparison to what I currently have equipped. 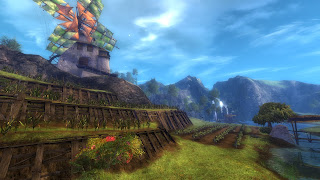 I'm a little confused as to why melee characters have cast bars on their auto attack. I suppose even in World of Warcraft people eventually created mods to track swing timers - essentially the same thing in the end. Intermittently, I seem to encounter events or monsters that seem to try and force you to use the game mechanics to your advantage - slowly teaching me when to use a lot of these context appropriate buttons I have at my disposal. These times are infrequent; however, and auto-attack is still usable as your primary means of disposing of regular monsters.

The level scaling system for each zone does not give you that bad sensation of never feeling overpowered that sometimes plague other RPGs that use a similar mechanic. In fact, it often feels quite the opposite. I think, though I am not positive, that a combination of your traits and items is taken into account enough for you to feel pretty powerful. While you may not one-shot every mob in the zone you still feel like you have a significant advantage.

ArenaNet decided to lock of your later traits until you hit level 40, I think to the detriment of player customization. I'm not even allowed to go down one trait tree all the way. Instead I'm forced to break up my trait points into multiple trees even if I didn't want to spec in that direction.

I may have just gotten into the armor dye system but I quickly found how much of your time it can soak up. It finally dawned on me that you can tweak your armor anytime with these dyes so my tinkering time has climbed significantly. Transmutation stones are also fantastic, allowing you to combine the looks one one item and the stats of another, but I worry I'll never find shoulders as good looking as my starting ones. 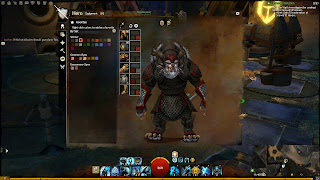 Also, I keep forgetting that I have karma and I probably should be spending it at every completed heart. That being said, word is that saving up some karma for a weapon when you hit 80 might be the way to go.

I'm not sure I necessarily buy the fact that the holy trinity is absent from the game. While there is no spike healing for half your health bar and some hits from mobs are intended to be dodged, I can certainly tank groups of mobs or an event boss as a Guardian just as I might in WoW or other MMO's. Similarly there's enough healing skills and +healing traits and stats that I can nearly be a dedicated healer. Perhaps the lines aren't as defined between the three types of roles anymore but they are still there for sure.

Meanwhile, World vs World is starting to grow on me as I had a great experience the other day. It occurs to me that tanking in PvP may actually be a viable option for once.

The constant displaying of map progress is enough to make almost anyone a completionist. I normally don't care for this type of thing but I find myself strangely compelled to 100% zones even to the detriment of my XP/hour. I found myself just wandering around getting Vista view points and new waypoints for the fun of exploring. 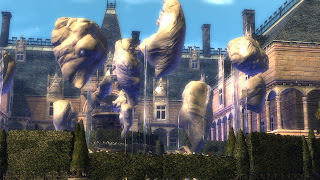 One the technical side,  the -perf command does not seem to work as intended according to the Guild Wars 2 wiki. In addition, new Nvidia 306.02 Beta Drivers add ambient occlusion support which makes me very happy.

Some things just not explained enough. A lot of standard MMO tropes are gone here but I still felt like I had to do a bit of googling, experimentation or asking other players to figure out out the basic functionality of how some of the systems worked. The Mystic Forge is one example that comes to mind. Should I be using it now? How would I know to go to Lions Arch and find it if I hadn't looked outside the game to find what to do with these mysterious coins I got from doing daily achievements?  For those of us whose primary MMO experience is WoW, there's a lot of adapting to do. I really don't feel like the game explained much of itself very well. Some people may not think to talk to random NPCs that do not have a exclamation point above their head to access content.

One huge positive I find is the incentivized helpful and friendly play styles. ArenaNet gives people personal incentives to help your fellow player (like experience points) and so far I've seen it work fantastically time and time again. I can't tell you how many people I've revived or have revived me. 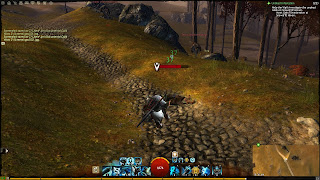 While I haven't yet participated in any instances or tried every single crafting profession, I think I've got a good idea what the game is offering. From someone that's spent forty hours so far, buy this game. Despite my criticisms, Guild Wars 2 is offering a refined experience with an enormous amount of features that doesn't exist elsewhere on the market right now.