Planetside 2 is a Free-2-Play First Person Shooter done in an MMO format which is currently in a Closed Beta. While at PAX East I saw a booth for it and I passed it up. I had heard of the first one, never ended up playing it and was not really interested to do so despite my love for the FPS genera. The other day, I was given a beta key, so I figured I'd give it a try. After about 10 hours of play, I'm actually pretty surprised. A huge world, great character customization and a system that makes it very easy to jump into combat has made me very excited for the rumored full release in December. In this post we'll take a look at some of the highlights from my experience with Planetside 2 so far.

Planetside 2 features 3 factions to choose from, the Terran Republic (Red Team), New Conglomerate (Blue Team) and the Vanu Sovereignty (Purple Team), which are locked in a battle for the Earth's resources. The obvious goal to take over as

much territory for your faction as possible. This is done through the capturing and defending of key locations within sections of the hexagonal grid that makes up the world map. These locations vary from simple supply outposts which you can take to disrupt the flow of supply to adjacent tiles or major bases that provide a variety of vehicles (both air and ground) 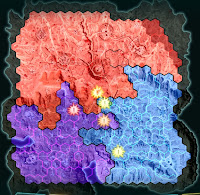 or spawn points to the controlling faction. The method used to take certain positions can vary. Larger bases require that you disable several shield generators around the base to give you access to the inner areas, while some will simply have an area in the open that you'll need to occupy long enough to eventually capture. While in the world, you are free to wander the entire map as you wish. This means that you can go deep into enemy territory and work your way to the front cutting off a team's supply line as you go. Supplies are used to purchase vehicles and to resupply your secondary weapons while in major bases. 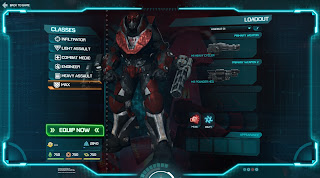 You'll have 6 classes available to you to capture these areas on the map. The available classes are Infiltrator, Light Assault, Combat Medic, Engineer, Heavy Assault and Max. Each class is pretty self explanatory, but the Max class is rather unique. This is essentially a mech-like unit that is armed with a chain gun and rocket launcher. This is a slower class and cannot be healed by medics, but is difficult to take down without using explosives. Rather then having to pick one class and stick with it, your character can play any class at any time.  You will gain Ranks (levels) by killing other players and capturing locations on the map. With each Rank you're given points which you can spend on Certifications that can be used to upgrade certain things in each class. Things such as armor, damage, weapon capacity, etc... You also earn Auraxium (the in game currency) which you can use to purchase new weapons for each class.

Getting your character into battle is easily done in Planetside 2. Because the world is huge, a cool feature to bring you right to any major battle is available. It's called "Instant Action". Basically, every 30 minutes you have the option to be dropped in on major battles indicated by exclamation marks on the map. This allows you to get into the game and get right into the action with little effort. I found myself jumping into major battles, staying until action died down, then jumping to another area. It definitely helps hold your interest. When you decide to drop into a particular hot zone, you're literally 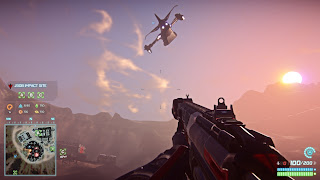 dropped out of the sky in a pod which crashes to Earth and you're in battle. If you die while on the ground, you're given the option to respawn at any of the controlled spawn points around your current location. Spawn points are usually located near areas where you can purchase vehicles which allows you to rearm and get quickly back into the action. There are also transport vehicles like "Sunderer" (Armored Personal Carriers) and "Galaxys" (Air Personal Carriers) which players can use to bring you to the front.

Combat in the game is great. It's fun running around with your squad, taking strategic locations on the map while defending base from two opposing teams though there are a few things they can do 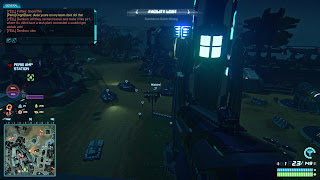 Another thing I find kind of annoying is that the vehicle controls feel a little clunky. With some vehicles, I find it hard to turn or the physics go crazy when you go over small bumps and it takes forever to recover. I am playing with a mouse and keyboard, so a joystick may help, but you'd have to think most people will be using the mouse/keyboard setup. The good news is, they've already made an updates which pertain to the control of vehicles, so they'll likely continue tweaking. 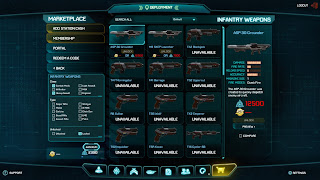 Lastly, as the game is free to play they have Station Cash which can be purchased with real money which you can use in game to buy upgrades and equipment. From what I've seen, it looks like purchasing this cash will give you a big advantage over players who are not putting money into the game. It's still early, but it seems like this could be a deterring factor for some if their current in game costs continue.


Overall, I think it's a good game that I'll likely keep playing after release. This is a highly recommend game for anyone who is into the Battlefield series of games as the playstyle is very similar, just on a much larger scale. Thanks for reading! 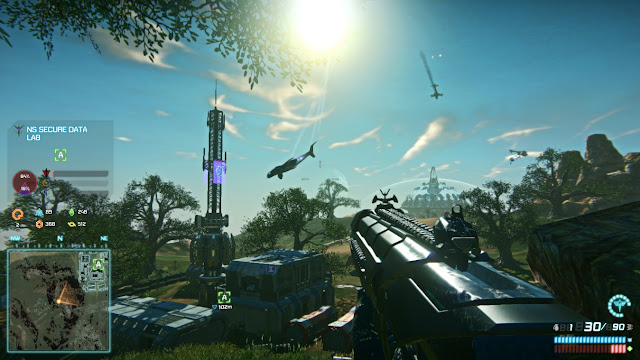