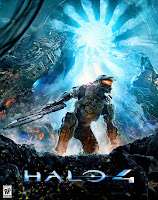 In 2010 Bungie announced that they were leaving Microsoft and signing a deal with Activision, therefore leaving Halo behind. Soon after it was announced that 343 would be taking over the Halo franchise and making another trilogy. This caused a lot of anxiety among fans of the franchise. After playing though Halo 4 it is clear that there are still somethings to be concerned about, overall the core of Halo is alive and well. Read on after the break to see my full thoughts.

First things first, this is Halo. It feels like Halo in every way that matters. That being said, 343 has tried to put their own mark on this game. While they have succeed in some areas, they have also fallen a bit short in others. The graphics and lighting in this game are nothing short of amazing. The in-game dynamic lighting makes the environments look spectacular. The cut scenes add an amazing element of realism reminiscent of the work Blizzard does. The updates to the Master Chief's armor bring the whole package together, making the best looking Halo game to date. Graphics were not the only thing to get a nice coat of polish; the sounds bring life to the weapons. Each weapon got new audio that gives life to each shot which helps to give each shot the feel of a real impact. Some of the new audio clips leave a little to be desired, the Warthog for example. The first time I heard the new engine audio it was a little jarring, it just doesn't fit with the updated beefy look. Overall, the graphics and audio make for a fantastically immersive gaming experience.

Where 343 had the biggest chance to take the franchise and make it their own was the story. It has been 5 years since the last time we saw the Master Chief. The Halo fiction is so immense 343 could have taken the story in just about any direction they could imagine. It is pretty clear from the start they chose the safe route. The game starts right were Halo 3 left off with Cortana and the Master Chief adrift on what is left of the Forward Unto Dawn, when a group of Covenant who don't know the war is over find the ship.  In no time you are on the ground on yet another Forerunner planet, fighting the same ol' Covenant. Shortly after landing, the player is introduced to a new enemy, the Prometheans, who appear to be the guardians of this particular Forerunner planet. In the end the story feels too much like the first trilogy. Take out the Flood, insert the Prometheans, and continue with the same story arch. This is the biggest disappointment with this game, 343 never tried to step outside the box with the story.

From the announcement of this game, 343 said this would be a more personal game for the Master Chief and in many ways they make good on that promise. During the campaign there is a lot more dialog between John and Cortana exploring a lot more of their relationship. There are a lot of opportunities to explore a lot of interesting parts of the Spartan mentality that seem to just be passed up. The story also seems to rely on a lot of information that is outside the scope of the main games. The antagonist is a character that is introduced in books that take place before the events of the first Halo game. This alone does not create a problem. What is a problem, is when the player is required to either find all the hidden Waypoint videos or seek outside sources to gain any amount of information on who these characters are. Leaving out or hiding some of the back story can be used as an effective tool to draw a player into the fiction. When used incorrectly it only serves to turn the player off to the story all together.

From a game play prospective there are a lot of things done well in the campaign. The Prometheans introduce new enemy tactics and classes to the player. With the Covenant most of the time a direct head on assault will be fine. The Prometheans tend employ more of a team mentality. Some enemies will heal, resurrect, and shield their allies, while others swarm the player. This means players have to prioritize some enemies over others in a whole different way. With the new enemies comes new weapons; sort of. In a lot of ways these new weapons are just the same weapons players are used to with some different models. There are some new weapons that have different effects. The Promethean rocket launcher for example. When fired it launches 4 mini rockets, when one hits the others spread out around the area. Probably my favorite thing about the new weapons is there are new animations. Each time you pickup a new weapon it assembles itself in your hands. It is a small thing but it helps to separate those weapons from Covenant or Human ones. Co-op in the campaign works well. There are some mechanics could be a bit more co-op friendly. Armor abilities will not necessarily be available for both players at any particular point. And some of the vehicle sequences are not built with co-op 100% in mind.

Multiplayer is perhaps where Halo has always shined the most and this game is no different. The big change in this game over past iterations is the addition of the Call of Duty style multiplayer. We can all once again get the Pavlovian response to seeing the +XP in the middle of the screen when we do something good. 343 does add their own spin to this style. Kill streaks are replaced by ordnance which gives players additional weapons or power ups. The addition of this style of game play does not take away from the feel of the multiplayer, it only serves to enhance it. The UI is easy to use and laid out in a way that makes it easy to change game modes with your party on the fly. Getting into parties and games is almost never a problem. Generally the net-code is solid. In my experience there were only a few hiccups getting into matches which seemed to be larger problems with Xbox Live than they were with the game itself. The new addition to the multiplayer this time is the Spartan Ops mode. In this game mode players can team up for an episodic style co-op side campaign revolving around the Spartan IV Crimson Fire team. Each episode is comprised of 5 missions each, with a new episode being released each week. The first episode revolves around exploring different areas of Requiem, clearing enemies and recovering Forerunner artifacts. It is unclear what exactly this side story will have to do with the main campaign. Personally I hope they can find a way to use it to flush out the main story a little. In any event, it looks like it will be a nice way to keep players coming back for more co-op even after the main campaign is finished.


I have been a fan of the Halo franchise from the beginning. When it was announced that Bungie was out and 343 was going to not only take over Halo but going to put out a new trilogy I was nervous. There was the potential for a lot to go wrong with this game and franchise. There are some serious issues with the story. 343 played it safe for their first game, in the end this might prove to be the smart move. I am left with a question I don't know I can answer. Does the story get a pass just because they can improve it in the next game? This is one of the few situations in the video game industry where you can guarantee the other 2 games will be made. The defense for this will be that its made out to be a trilogy, so you should wait and see. Personally, I think there should be some amount of self contained story with in a game in a trilogy and this game doesn't do that enough. 343 has succeeded in delivering a Halo game Bungie would be proud of in many ways. The multiplayer is solid and Spartan Ops has the potential to keep a lot of players who might not be so interested in the competitive multiplayer coming back for a while. But 343 did not do enough to make this series their own. As to why they took that route only they know. The story telling was muddled at best. There were a lot of missed opportunities that could have made this a stellar story and experience. In the end, despite the short comings this is still a great game and I am very interested to see where 343 takes the Master Chief in the future.