Looking to dodge missiles and shoot the flashing weak spot on enemies while piloting a President's flying Mech? Then Liberation Maiden may be the downloadable 3DS shooter for you.


Liberation Maiden is a somewhat on-rails shooter developed by Grasshopper Games and Level 5. If you're familiar with Grasshopper games, I would like to warn you up front that you won't find any Suda51 weirdness in this bullet-hell shooter. Gameplay will be very familiar if you've ever played Panzer Dragoon or Rez though there is a bit more freedom of movement. Rather than being directed down a single strait path there is full 360 horizontal movement. The Y axis is somewhat restricted so you won't be doing any loop-de-loops.

Movement of your character via the 3rd person is controlled with the analog stick. You use the stylus to swipe over enemies to lock on and remove the stylus from the screen to release your projectiles. Other weapons are more laser-like and are just point and shoot. Horizontal strafing is done by holding down the L button. On another device, this would work just fine but the (original) 3DS makes this a painful experience. To clarify, functionally it works just fine. I had no issues getting my character to do what I wanted but I was literally unable to play this game for more than an hour at a time because my left hand was cramping up. The game requires you to both bear the weight of the 3DS only with your left hand as well as be nimble enough to control the analog stick as well as start strafing with L on a dime. I'm not sure I can blame the game for this since this is really a 3DS ergonomic design problem but it certainly hurt my enjoyment of the game. Perhaps if you already own the stand that comes with Kid Icarus this would be less of an issue. 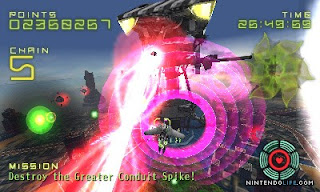 The mission structure is rather static throughout all 5 main missions, consisting of destroying three lesser spikes and then a major spike. You must destroy the sections closest to the surface before it raises itself out of the ground one section at a time. Boss battles are perhaps the best part of the game with the final encounter being both difficult and very fun. With the exception of the input limitations of the 3DS the mechanics never felt cheap or impossible. It may take a death or two to have you understand what the strategy should be to defeating a certain boss phase but there are limited continues that just resume right where you left off, so frustration is kept to a minimum.

The game introduces, early on, a surprisingly fun mechanic of using the same resource for both your shields and your damage. Do too much damage at once and you leave yourself open to losing health if hit. On the other hand, rapidly dispatching foes allows you to pump up an on screen meter that, when full, allows you to use a screen clearing attack. Most boss battles end in a gimmicky quick-time event that just has you moving the stylus in a circle but after the hectic (and difficult) stages of the boss battle prior, it's a welcome cathartic exercise.

The story is rather strait forward in the futuristic Japanese type of way. You get a brief anime cut-scene letting you know that the female protagonist (Shoko) you will be playing has just been elected 2nd president of New Tokyo. Did I mention new Tokyo is a flying airship? Apparently, instead of trying to further a legislative agenda this entails piloting a Mech suit and trying to take back the earth from...some unnamed enemy allowing nature to take back it's rightful place. Nature is, in this case, a flowery green mass that takes the place of blocky buildings and anti-aircraft guns.

Voice acting is adequate but won't blow you away. Sound effects serve their purpose and don't get annoying through the course of the game. The music, if you are into some Japanese Rock/Pop is actually quite good. I found myself humming along to some of the songs after some time with the game.

Graphically, Liberation Maiden is a mixed bag. 3D is just an inherent problem in this type of action game. I kept having to readjust the position of the 3DS as I lost the 3D effect by shifting the console every so slightly as I frantically tried to dispatch the huge numbers of enemies on screen. Given the fast paced nature of the gameplay this occurred every 5 or 10 minutes. For Liberation Maiden, the 3D effect, I found, really doesn't add to much to the game. The entire game is on one plane save for your character and a few large projectiles. Because of the behind the back view the added depth really didn't help or hinder my perception of where I needed to move to avoid taking damage.  For the 3DS, the game still looks a bit flat at times with rather blatant low polygon models. The low amount of detail is rather evident in a game like this where large swathes of land and many objects are on screen at once. I was able to see a heavy amount of aliasing but it didn't detract from the experience during actual gameplay. The frame ready is generally steady and rarely noticeable when it dips below 30.

Keeping in mind this is a $7.99 downloadable title, there is good value here. With both a story and high-score mode available to you, as well as three difficulties, there is enough here to warrant the price. While a bit short at about 5 hours long, the entire experience was very fun - which to me outweighs a lot of the negatives I've listed here. If you're looking for some quick action gameplay on your 3DS that won't break the bank, I would recommend Liberation Maiden.