From the Steam Sale: Mark of the Ninja 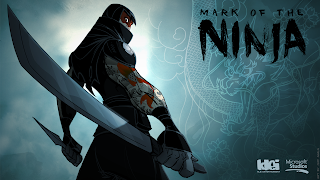 I first saw Mark of the Ninja at PAX East 2011 and it grabbed my attention right away. I am usually the kind of person who likes stealth action games then plays about 50% of the game, gets stuck, and never touches it again. Mark of the Ninja is not that game; from the beginning I was sucked in and couldn't stop.

The combat in Mark of the Ninja is simple and in most cases is more of a puzzle than actual fighting. There are a few enemy types that require some actual face to face combat but the majority of the time you are finding ways to get behind or above enemies so you can press X and kill them, while being a quiet as possible. This is where the fantastic level design comes into play. Every level is designed in a way that lets the player choose whether they want to sneak past enemies or butcher them in some very creative ways. Sound and light are your biggest enemies and allies in this game. Shooting out a light will give you the cover of darkness, but also distract near by guards with the sound of the light going out.

Throughout the course of the game you unlock different tools and skills that allow you to sneak past, distract, or just murder any guards in your path. Things like throwing darts and smoke bombs are just the beginning of your ninja tool box. There is also a skill tree system, of sorts, that unlocks new moves and extra abilities for some of the ninja tools. By the time the game ends you have acquired enough skills and tools to replay the game in a few different play styles. You can go as the super stealth ninja who is never seen and only kills when he has to, or the rampaging ninja who cannot and will not be stopped, until all who stand in his way are dead.
The story is simple but interesting. You play a Ninja who is awakened, after receiving a tattoo, during an attack on his compound. After fighting off the attackers, you learn your tattoo gives you fantastic ninja powers, but at a cost. There are some interesting twists throughout the story that ultimately leaves the player with one choice to make. In the end I was left really wondering if I had made the right choice. The art style and general mood of the story work well together. The back drops and level design all work together to really draw the player into the game. This was one of those games I could sit and stare at, without blinking, until my eyes started to water.

I purchased Mark of the Ninja during the last Steam sale for $5. To be honest I feel like I still owe the developers more money. So much so that I bought the game again when it was included in a Amazon bundle.  While it is only about 10 hours of gameplay, the amount of enjoyment I got out of being a bad ass ninja was worth at least the normal $15 price tag. On top of that, add new game plus and you can spend weeks finding the secrets of every level and being the baddest ninja ever.