Gauntlet Legends for the Nintendo 64 was a wonderful port of the arcade game of the same name. To be reductionist, the game is an isometric cooperative dungeon crawler with persistent character advancement. You can take up to three friends with you on an adventure that has you seeing the standard fire, ice, forest and hell-like areas as well as slaughtering orcs, goblins and other monsters while ever improving your characters statistics. While perhaps simple by today's standards, the game at the time was a fantastic romp that withstood repeated playthroughs with friends.

The game was mostly overlooked because it was an arcade port that was also on the Playstation and the Dreamcast. Diablo II came out one year later and anyone with a PC and an addiction for loot and experience points fell for Blizzard's masterpiece. That being said, one great experience does degrade another simply by relativity. Gauntlet was still a great experience in it's own right. The game had surprisingly solid gameplay mechanics. Damage dealing abilities felt snappy and enemies didn't feel like damage sponges. Leveling up your familiar was incredibly satisfying as well improving your individual skills to unlock new graphical effects.  Levels that didn't feel incredibly boring after repeated playthroughs and still provided challenge as the game scaled. 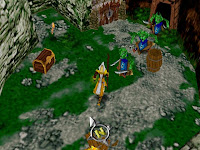 At it's core, Gauntlet is about playing with your friends. People love to play with their friends. It's why sites like Co-Optimus have become popular and MMO's like World of Warcraft and Guild Wars drag me and my friends away from other games on a somewhat regular basis. 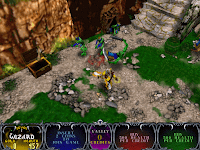 In 2001, the game was actually given a sequel. Gauntlet: Dark Legacy was released for the Arcade, GameCube, PlayStation 2, and Xbox. It featured new characters to play and new levels. Sadly, I think the game didn't evolve with the times.

At this point, the Gauntlet franchise should stay in the past. Games like Diablo III and Torchlight II satisfy the cooperative dungeon crawling itch with more depth than Gauntlet has ever contained. I will still remember it fondly; however, dreaming of stealing boss experience by spamming rock shower while my pet bird layered the screen with fireballs.