Over the weekend I picked up the game Total War Battles: Shogun off Steam for $4 and I have to say I've been pleasantly surprised. This mobile game port to PC while short, is a good bang for your buck and certainly worth the download. If you're into puzzle games and the Total War series, this is one game you should take a look at. 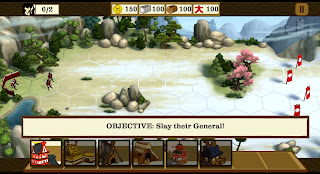 Total War Battles: Shogun takes place during medieval Japan and offers two modes of play, Skirmish and Campaign. In the Campaign mode, you take control of a young clan leader who's father was betrayed by their closest allies. The Skirmish mode is essentially a mode which allows you to select a difficulty and build freely. You're also given 6 battle fields to choose from when in Skirmish mode to avoid things getting repetitive.

During the Campaign mode, you follow the story of an unnamed warrior who is on a quest to revenge his father's death. The story can easily be overlooked, however it does offer some voice acting which makes it slightly more interesting. You progress through the campaign by completing 23 storyline missions with side quests opening along the way. These side quests

typically involve some type of puzzle whether it be building a certain amount of buildings in a restricted space or taking out a particular target with a limited amount of combat units. Upon completion of these side quests, you are given experience which can be used to upgrade things like the gathering rates of buildings or how quickly your units respond to your orders.

Combat between units basically breaks down to a rock, paper, scissors style system and will occur when units come within range of each other on the battle field grid. Once your unit has been trained, you place them on the grid and they'll move straight across the map until they encounter an enemy. You can also have them move up or down a row on the grid while moving forward, but this command has a cooldown before you can use it again. Units will enter melee combat when they are adjacent to each other where ranged units are limited to attack when an opposing unit is moving towards them on the same row. Some ranged units, like archers can fire other obstructions where riflemen will need a clear shot at their target.

The graphics are very cartoon-like, but are done very well. Usually I'm not a huge fan of this art style, but there is something about it that just works for me.

Even though I got the game on sale at 50% off, I would totally pick this one up for the full price of $8. It's a good game that you can pick up for a few minutes, accomplish something and put back down. At a total play time of roughly 10 hours, I'd recommend you pick this up from Steam or for your mobile device.