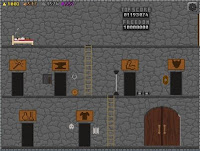 Mobile games are such a hard design problem to crack. How do you design a game that can be picked up for minutes at a time, give the customer some sort of satisfaction for that brief time invested, while also having enough depth they don't uninstall your game after a day.  EightyEight Games seems to have crafted 10000000 to be the solution to that problem but I'm hesitant to say whether they've truly succeeded.

10000000 fuses match-three, Bejeweled like gameplay with RPG mechanics. Match either swords, staves, shields, wood or ore to do damage, protect yourself or collect resources respectively.  The idea is to last as long as you can before you get pushed off the screen by enemies, locked doors and an eventual boss monster. Then spend your resources on permanent stat bonuses using the various resources you've collected. Ore and wood are used to upgrade your "rooms" which serve as different talent trees you use to buff your character in specific ways. Repairing and then upgrading the rooms unlocks further bonuses that in turn cost more resources. Spend gold to upgrade your damage when matching swords and staves and use your experience points to give yourself general upgrades. The RPG mechanics do a good job of giving each outing in the dungeon more significance while also allowing you to get further each time. Venturing into the "dungeon" to do match-three combat brings with it some specific objectives you can try to accomplish for bonus resources. Again, one more mechanic that keeps matching tiles a little more interesting. There are potions you can activate later on that allow you to buff one kind of resource collection or type of damage while sacrificing something in return but none of them seemed very helpful overall. 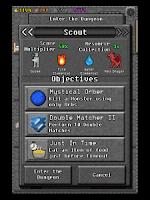 Weirdly, matching three tiles together felt rather imprecise. I found myself over scrolling the row or column and actually losing time because of it. Once, the issue  ensured my death at the boss monster at the end of each section. I struggled to discern for a while whether it was either my phone, my ineptitude or the game and after testing the game on three different devices, determined it's merely the imprecision of the row or column scrolling. In addition, constantly having to return to Home only to have to once again wait for your character to jump out of bed and run down the ladders doesn't add charm to the experience, just annoyance - especially for a mobile,  bite-sized game.

Graphics are intentionally 8-bit and serve the mechanics just fine. I can't say anything you see will be impressive but it actually reminded me of old commodore 64 titles I used to play rather than some NES callback. Sound is equally competent but neither the music or the effects will blow you away.

I played 10000000 for a bit more than a week. The dungeon runs are short enough that I can whip out my phone during brief periods of downtime and feel like I accomplished something. Towards the end of said week; however, I felt as though I were merely going through the motions. The satisfaction of unlocking more stat bonuses were far fewer and far between making each dungeon run less and less meaningful. And as you might suspect, simplistic match-three combat doesn't really hold up without a more significant Pavlovian response to back it up. For $1.99 on the Play Store, I would say give it a shot but don't expect any kind of significant longevity from the experience.