Mobile RPGs must be quite difficult to create. A developer is playing to a demographic that wants an engaging experience that rewards persistence but also only has 5 minutes to spare before they put it away. The nature of the device is diametrically opposed to genre. Dungelot from Red Winter Software aims to bring both of these ideas together. But does it succeed?

Dungelot wastes no time getting you to the action. Select your character class, of which only one is available at the start, and proceed into your first Dungeon. Dungeons are labeled merely as Dungeon 1, Dungeon 2 and so on.  You tap tiles to reveal their contents; each containing monsters, treasure, items and arena rooms. Battling the monsters merely requires you to tap them until they die. At least as far as grinding RPGs go, there's more interactivity than Blood Brothers. Items you pickup range from Lighting Spells to poison to health restoration.Your inventory is rather small which incentivizes use of the items them rather than encouraging you to  horde them or sell them back for health and money.

After you've traversed a good amount of dungeons, the game introduces you to some simple quests (save three damsels in distress) as well as new enemy types. Some enemies will start to attack you from across the board, every turn, so getting to them is a priority. Others will poison you or merely block your way. There are a good amount of enemies once you're 20 or 30 dungeons in as well as some randomly generated health drains (bad food) as well as temporary characters that will do or take damage for you. The lust for money, items and loot drives you on but upon your first death you may be sad to find your items are lost to you. Only your money remains. Spend that money on skill upgrades and dive right back in either as the same character or potentially one of the unlocked ones. I seems to me; however, that the Vampire trumps them all with his health regeneration. 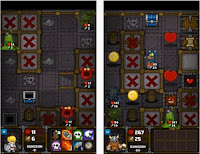 Gameplay is admittedly simple and can be played with one hand. This may be a negative or a positive depending on your perspective and expectation  Graphics are simple and cute but well designed. You never confuse one item with another and easily learn to spot which enemies have which abilities. Audio is passable but I ended up playing the game on silent so as not to disturb my significant other. There's really no story to speak of beyond the quirky descriptions of monsters. You're just a hero clearing dungeons but I think the omission of some long text box is perfectly acceptable for this type of game.

For only .99 cents Dungelot isn't bad value per-say but I found my interest waning after only a few days. What's frustrating is that there's a good base here for more varied gameplay and complex mechanics that seem surprisingly absent. After only four or five run-throughs I had leveled up my Vampire to a point where I would gain more life than I was losing per dungeon floor, making the tap-tap combat even more mindless than it had been in hours past. And when the combat becomes boring, there's really not deep RPG mechanics to fall back on. Each skill can only be leveled three times, and while the five characters help with some variety, it's not fulfilling to start over at square one for the third of fourth time. If you're looking for a game for the weekend or just to pass a couple days Dungelot is worth your time; just don't expect the game to hold your attention for very long.