Increasingly I find a common development principle permeating most of the new games I play. Less moves to learn. Less buttons to press. Shorter combos to memorize. I've found it in my fighting games, in my MMO's and my MOBAs. And for a short time it irked me. They're taking out the complexity. They're dumbing down the things I love. But after some time I came to realize the positive aspects of this approach to game design.

The accessible nature that a lot of games have taken on really is a good thing. Nearly impenetrable experiences, like say Eve: Online, will forever be relegated to the realm of obscurity. I love Eve from afar, or at least the concept of Eve, but it is just a nut a I cannot crack nor do I have the time to do so. It really is not about the number of buttons you have or how many menus, dials and switches a game can have that creates depth.

How and when to use those buttons is far more paramount to the depth of a game than the sum of it's UI components. Game design moving towards rapid decisions based upon the situation rather than memorizing twenty or thirty buttons or combinations of button presses is fast becoming the norm. Maybe it's because I 'm getting older or maybe it's because I've played enough games in my 27 years to realize fifty buttons is memorization and nothing more. Memorization is both uninteresting and my life no longer has the time to schedule in learning a game for extended periods so I can actually play it and enjoy the experience. I do not need, nor do I want, that initial complexity or steep learning curve.

If we focus on hotbar UI's for just a moment you can see the progression of Everquest to World of Warcraft  to say, Guild Wars 2. There's a streamlining of the interface that makes for a much more accessible experience. If you want people to enjoy the meat of your game don't hide it behind 45 buttons. Heck, look at League of Legends - a game with even less buttons and arguably more competitive depth than all three previous games combined. 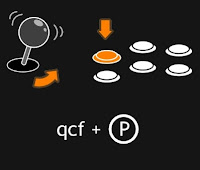 This transition is already happening in other genres. Street Fighter IV only makes you memorize 3-4 sequences of button presses per character (on average) and then uses variations of those (do said sequence twice) to create more moves. This allows even a novice fighting game player to learn the cool stuff quickly and then over time figure out when is best to use those moves in the context of what is happening and who you are fighting. The game has a lot more depth what with it's Focus-Attack-Dash-Cancel's and whatnot but the point is you can still play the game before you master it's more advanced tactics.

Ideally, all games like should be like Chess; a limited amount of  knowledge to play but taking a lifetime to master. This is both beneficial to the aging gaming audience who has less time than they used to in their younger years, as well as developer revenue. Typically, the more accessible a game the broader its appeal and the more copies sold. I can only hope that developers don't warp this trend into simplicity - it's an easy mistake to make.