I was first introduced to World of Tanks at PAX East in Boston and it was not received well.  They had two people that had no business instructing people on how to play any game, let alone a game as in depth as this one.  After a disappointing 10 minutes of game-play and listening to the same 30 seconds of a dubstep song on repeat, I had written this game off.  But a discussion with my father regarding World War 2 history a few months later led me to give the game another go and what I found was very surprising.  The historical accuracy pulled me in and the HUGE, in depth skills trees have kept me interested ever since.  In this post, we'll take a look at some of the pros and cons of this game and what really makes this free-to-play shooter worth the download.

First, we'll start of with some of the things that make this game great.  The historical accuracy of this game is amazing. If you're into World War 2 history, you're going to love this game.   The models for each tank are fantastic and a very detailed.  You're able to select tanks from France, USA, Russia or Germany and each nationality gives you access to nearly every tank used (and some that didn't even see combat) during 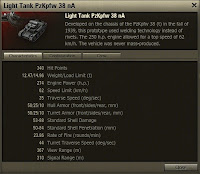 World War 2.  If you're really into the history of these tanks, the game gives you a great detailed break down of each tank with the historically accurate specs and a description of it's time in service.  This was something that was never pointed out to me at PAX. The details are actually pretty interesting to read and gives you a bit more of a connection to each tank.  It's was also great to read about some of the tanks that were only experimental but never actually saw any service; then get to play with them! 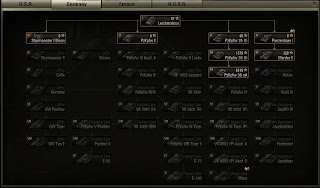 Another really amazing feature about this game is the tech tree.  You have to go through each individual tank's tech tree to unlock the next tank in the overall tree.  The overall tree is HUGE and the image to the right is only the tree for GERMANY.  There are 3 other nationalities all with their own trees and almost nearly as large.  Now, the individual tank trees are not as large but are just as involved as they 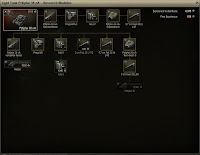 allow you change the tank's turret, gun, treds, engine and even the radio (it helps with spotting opponents on the mini-map)!  Each time you enter combat you're given experience points based on what you do in game. You use these points to unlock items in each of the tank trees and eventually to unlock new tanks.  You also use Credits (or Gold, their "you paid real money" currency) to purchase the techs you've researched.  Credits are earned through participating in battles. There does not appear to be a set amount that you get for a hit, kill, or locking down a key location but you almost always end up with some amount of experience and credits at the end of the battle so you always feel like you're progressing down each tree.  Finding a game with a tech tree as deep as this game is rare, especially in what is essentially a shooter.

The Free-to-Play style of game can be precarious if done incorrectly.  A 12 year old with mommy's credit card can easily ruin the game for the whole userbase.  World Of Tanks doesn't seem to have that problem.  There are certainly benefits to buying Gold as it will allow you to manage more tanks at one time, handle more crew members and allow you to get higher tanks quicker but the game still comes down to skill.  I think they did a great job of making it easy to play without forcing you to have to buy everything with real money.  You can log in, play a few matches, not sped any money and still feel like you've accomplished something. 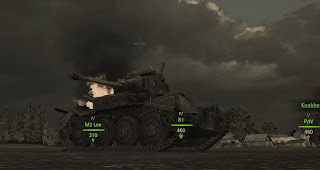 Now lets visit some of the less appealing things about this game.  The first problem you'll run into is the speed of your tank.  This was a HUGE turn off for me when trying the game at PAX.  The game is somewhat historically accurate so if you have a slow tank with a poor engine, you're going to be slow...but for a shooter, it is kind of taken to an extreme. You CRAWL when using the starting engine in almost any of the first tier tanks.  Another thing that makes the speed an issue is that this is a "no respawn" game meaning that if you die, that round is over for you (though you can quit out and join a new one with a new tank immediately with no penalty).  So if you're slowly trying to get to your vantage point, you finally reach it after driving for 5 minutes then die instantly, it's a little frustrating.  The best way around this is to save up your experience points and credits then buy the first engine upgrade you can as soon you can and the speed will at least become bearable. 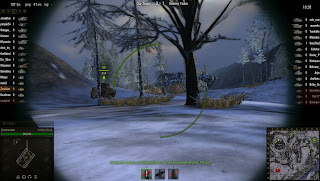 The next thing you'll probably notice is that the game can quickly become "World of Snipers".  As the game goes at a pretty slow pace, especially in the first couple of tiers of tanks, people will get to a location and camp it.  This happens quite often as people will sit in a defensive location until either the time runs out or someone decides to be crazy and make a run at you. Once combat starts, it typically doesn't end until one team finishes off the other but it can be hard to get to that point sometimes. You'll find yourself sitting behind some trees or a house, using the scoped barrel trying to hit people who are also sitting in trees or behind a house. This isn't really a problem later in the game, after you level up to higher tiered tanks, but it can still be pretty boring at the earlier levels.


Lastly, the game seems to have a balancing issue once you hit the tier 4 tanks.  As I keep mentioning tiers, I may as well explain them now.  If you refer back to the overall tank tree, each set of tanks is on a different level or "tier". Tanks at the top are tier 1 tanks and tanks near the bottom are tier 10 tanks.  Now while you're rolling around in tier 1-3 tanks, the game does an excellent job of balancing, meaning that you'll be against the same amount of tanks at roughly the same tier.  However, once you 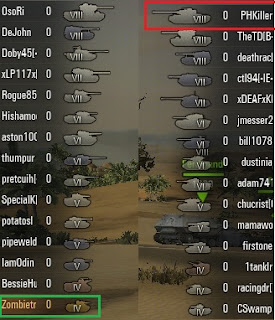 hit tier 4, that seems to change.  Once you're tier 4, you can be going against tanks as high as tier 9!  This is a problem, because the game is again, historically accurate.  My Russian T-50 (Tier 4 - Green Box in the image) has NO CHANCE of even scratching a Russian KV-5 (Tier 8 - Red Box in the image).  Now this wouldn't be so bad if there was maybe one tier 8 tank on the other team and we had our own, but there will be many more higher tiered tanks in a game then lower tanks.  They do pair the teams evenly in terms of how many of a certain tiered tank is on each side (if there is one tier 4 tank, the other team will also have at least one) but it is still incredibly frustrating when you run into the other 5-10 higher tiered tanks in the game and get killed instantly.  Fortunately, as of late, I see this kind of poor balancing happening less, but it is still enough to take away from mid game matches.  I'd rather wait an extra thirty seconds to a minute to get paired with tanks of my tier, then wait five seconds then get thrown into a game with tier 9s.

Overall, I give this game a 3 out of 5.  I think the game is worth the time to download and play, especially if you're into World War 2 history.  It's easy to get into and once you play a few matches, you'll pick it up pretty quickly.  Thanks again for reading and we'll see you on the battle field!