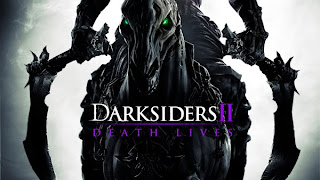 After what many fans have considered a long wait Darksiders II was finally released this past Tuesday. I took some time to sit down with the sequel to one of my favorite games of 2010 to see if it would live up to my expectations. After completing only the first area of the game I can say, overall, I am not disappointed.


I opted for the PC version of DSII mainly because it was $10 cheaper than its disc based counter parts and Steam clearly needs more of my money. That being said, I was disappointed by what I saw when I started looking through the menu system. This was clearly just a port of the disc based versions of the game. There are no extra PC options for graphics or sound, you are presented with an interface clearly designed for use with a controller. You can turn v-sync on and off, change the screen resolution and that is about it. The menus in game are just as bad. Using a combination of the shoulder buttons and triggers, navigating the skill trees, inventory, and map is clunky at best. The character model in the inventory screen is about as low-rez as you can get, which is disappointing for a game that now includes loot. Half the fun of having loot is seeing how it looks on your character and to have to leave the menu to see that is disappointing.

The loot system is a new addition to the Darksiders franchise. In DSII loot is handled the same as anyone would expect to see RPG loot handled. There are trash items and then the standard green, purple, and orange loot levels. The game changes this up a little with the addition of possessed weapons. Possessed weapons are simply weapons that can be fed other loot to upgrade their level.With each level the player can give new abilities to the weapon. This is an interesting way to change up the standard RPG loot system, making the player choose between just selling all their extra items for gold and upgrading what they have is a nice idea. The only problem is this system is not explained in game. I found myself fumbling through a bit until I figured out exactly what upgrades did what.

The first Darksiders was criticized by some as an adult copy of Zelda. Many others thought that was more a homage than a copy, myself included. Darksiders II continues this theme but adds the formula significantly.  The game layout is still very similar to a Zelda game. There is a semi-open world to explore with dungeons scattered throughout. This similarity with Zelda games is also shown in in the introduction of bosses at the end of each dungeon.  On top of that Zelda-base the developers did add some of the gameplay mechanics of Prince of Persia. Death is much more nimble character than War. In DSI most puzzles were solved through brute force, moving objects around the environment to unlock doors, chests, etc. In DSII the puzzles all involve where Death needs to get to in the dungeon. During these puzzles the game is all about platforming, but it is done in a way that provides the player with immense satisfaction when completed flawlessly.  Finally, the combat mechanics are a mix of Ninja Gaiden, Devil May Cry, and God of War. Death manages to string almost endless combos together while at the same time dodging incoming attacks with ease. Personally, I love this style of game play, when mastered it gives the player a feeling of being invincible if only for brief amounts of time. 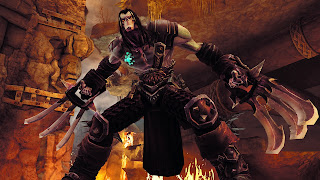 Combining these styles of gameplay makes for an amazingly fun game so far. Vigil has managed to take just about everything I loved about the first Darksiders, change the character and the combat and make it even better. The puzzles are challenging in the right ways where players fail enough that they are not bored but advance with enough speed that they don’t just put the game down and never return. Even with the few problems I have with the PC version of the game they do very little to take away the massive amount of fun that is Darksiders II. The best part is I am only 7 hours into the game which is at least 25 hours long.
Posted by Jason at 5:00 AM