In this post, we'll be looking at some of the lesser known RPGs on the SNES published by Enix in the 1990s that I think are still worth taking the time to play through. The games talked about here are games that I played as a child that I can still pickup and play today. Enix was a powerhouse in the SNES RPG world during the 90s but a lot of their games went unnoticed. Let us take a look at some of these games you may have overlooked.


We'll start with one of my personal favorite games of all time, The 7th Saga. This was a game published by Enix in 1993. The game featured seven selectable characters, on a quest to retrieve seven runes from around the world which give 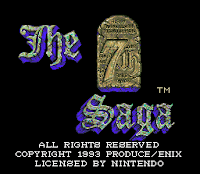 "great power" to the one who retrieves them all and will allow them to become the heir to the throne.  A pretty standard storyline. As you play through the game, your character will interact with the other 6 characters in different ways. You'll run into these characters throughout the game and depending on your strength (level) they may ask to join you or challenge you. What is kind of cool (but incredibly frustrating) is that if they challenge you and you lose, they take all of the runes you've gathered. This essentially means you cannot continue 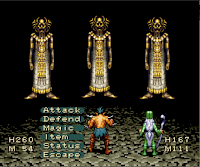 the game until you defeat this character. This was always something that bugged me as a child but it adds another level of difficulty to game. The monster art is great and they stayed away from the generic Goblin, Orc, Dragon, etc... monster set which keeps things interesting and leads to a more enjoyable experience. The game does suffer from a difficult issue late game.  You're eventually sent into the past as part of the storyline and the monster encounters become EXTREMELY difficult. This is partly because all of your runes are taken from you and as each rune offers a significant bonus in and out of battle it is a severe handicap.  I'm totally into the "ridiculously difficult" factor in any game, but I can see why this deterred a lot of RPG fans. Ultimately, it's a great game to play through on a weekend and you can find the game pretty easily on Amazon or eBay for around $10 so I highly recommend it if you have the time.


A game I discovered while I was in High School that was little known to anyone I knew was Robotrek.  This was game publish by Enix in 1994 that featured a nameless child, the son of a

famous inventor on a quest to stop a renegade group by the name of "The Hackers" by building and battling with robots. You could control up to 3 robots at a time, build their stats and outfit them with a variety of weapons and armor.  You could also craft items such as 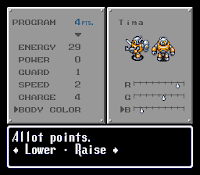 better healing items or new weapons for your robots. Combat is turned based, but you're allowed to move freely around the field to attack enemies or gather chests. As battles are completed, you receive Bytes/Megabytes which represent experience to level your robots. The customization is really what makes this game great, being able to not only customize your robots but also craft your own items 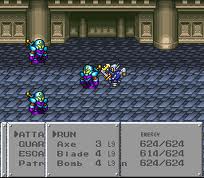 keeps the game interesting and the replay value high. As great as it is, it does suffer from a major flaw, it's length.  I'm all about getting your money's worth out of a game but this game just drags on and on and starts to feel forced the closer you get to the end. It's not a big deal, but can make the end of the game a little boring. Pick this one up if you can, it is a little more expensive and harder to find than 7th Saga but I've seen copies on Amazon go for as low as $20.

The last game I'd like to mention is Paladin's Quest. This was a game published by Enix in 1992 which featured a boy named Chezni, who releases an ancient beast accidentally as part of a dare and must do everything possible to stop it from destroying the world.  Now this is not a game that is known for it's great graphics with its' deliciously 90s color palette, but the combat and magic system is what really makes this game for me. The controls for the game are a bit wonky (especially while in combat) but the cool part is, you

can attack with almost every part of your body while in a fight. This includes anything from kicking an enemy with your newly equipped boots or simply headbutting them. Also, there is a huge emphasis on using magic in this game as it features an experience system for each individual spell circle. The more magic you use from a particular circle, the more effective it becomes. You can even combine spells of different circles to create new spells. One strange thing about the magic system in this game is that you use HP rather then MP meaning that every spell cast uses HP. This means you can't just blindly case spells over and over until you're out of MP and you'll actually end up killing yourself if you cast a spell that will bring your HP below 1. Another cool thing about this game is party 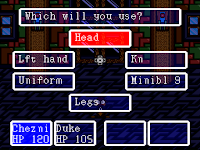 setup. The game features a throng of playable characters, 2 main characters and 28 mercenaries! The mercenaries which you can pickup throughout the game can be controlled in battle but cannot be customized outside of battle which can be kind of frustrating but they're usually well equipped already so it can be overlooked. This does however force you to change out party members often depending on the environment or your style of play. The party customization and crazy magic system really make this game fun to play and something I'd highly recommend picking up. It's a pretty easy game to find at a cost of roughly $15. I found my copy at a yard sale for $2 way back in the day, totally worth it.

I hope I've inspired you to bust out that SNES again and take a look at at least one of these games.  I can assure you that they're very much worth the time and money.  Thanks for reading!