Let me preface this article by saying that I thoroughly enjoyed my time with the Guild Wars Beta weekends. That being said, some of the hype I read around the web is getting borderline unrealistic. It's far better for people's enjoyment of the game to temper their expectations for what the game is and what is possible in the genre. While ArenaNet boasts a few features they bill as genre redefining, I think on release we'll find a perfection of the current generation MMO formula rather than a revolution of Massively Multiplayer experience.

Guild Wars 2 is an evolution of tried and true design. Amongst others, the genre was defined by Ultima, Everquest and World of Warcraft. While I realize Guild Wars came out April 2005 and WoW only in November of 2004, Guild Wars 2 clearly is informed by WoW's smart design choices. Guild Wars 2 is a traditional MMO taken to the pinnacle of the genre and then wrapped in smart business decisions. The exclusion of a monthly fee and inclusion of micro-transactions infers a forward-thinking business plan where the ArenaNet can survive without 14.95 a month from every customer.

Combat feels good with some classes, particularly heavy classes like the Guardian and Warrior but others, like the Thief, feel like you're hitting with pillows. It's not about the damage numbers but rather if the player feels like they're doing damage via animations, spell effects, enemy reactions and battle sounds. 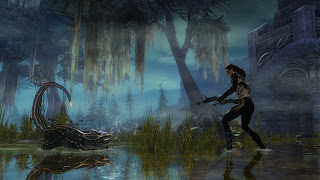 Performance will probably not improve greatly from what we saw in Beta Weekend 3 judging from past MMO betas. MMOs engines just don't seem to have the capability of displaying tons of models with tons of textures using tons of spell effects in a very small space while maintaining a good framerate. There's just too much going on on-screen at once. I would venture a guess that the first area of focus for ArenaNet post-launch will be patching game and quest breaking bugs in content that we haven't seen in the Beta Weekends.

In addition, some people may have the same issue they had with Diablo 3 skill system. You get some abilities very early in your levels and then just keep using the same ones because they are the most optimal. Passive bonuses from traits may not be enough to satisfy some players. This is a legitimate point of view that I don't hold personally but know others that do.

World Vs World will have balance issues due to the time of day, different server population sizes and potential steamrolling from active, coordinated guilds. This may work itself out over time due to ArenaNets balance system but you can expect some unfortunately lopsided wars.

I don't know what the next generation of MMO will look like. I think perhaps only Blizzard and Bungie may know that - and from the rumors it will probably be an MMO shooter along the lines of Planetside 2 but more smartly designed. The time for the monthly subscription has ended and perhaps the hotbar based fantasy multiplayer RPG needs a break as well. All mentions aside, I plan to play and enjoy Guild Wars 2 for the game that it is not the game that I want it to be.