I would like to start of by saying, as far as MMOs go my experience is almost entirely limited to World of Warcraft. I played WoW off and on (mostly on) since launch up until about a year ago.

I was only able to play the beta for about 6 or 7 hours so my experiences are somewhat limited. I started playing a Charr Warrior. I generally stick to that type of class when in most games I play. I like to play a character that can take a hit and smash whatever enemy I come across. You start the game with a sword and some basic warrior abilities. The sword combat felt fluid, each move and animation lead into the next. After completing some of the beginning quests I had enough money to upgrade to a hammer. I soon discovered changing my weapon had a major impact on the type of character I was playing. With a hammer I was now able to stun enemies and knock them back while inflicting some decent damage. Every time I hit an enemy it felt satisfying.

The Charr starting area was fun. You start the game by defending your city from a ghost army, eventually making your way to a tomb to kill the ghost commander. Finding where you were supposed to go and what you needed to kill when you arrived was never a problem. The mini map always had a green arrow guiding the way. Objectives are always very clear on the map. This alleviates the need for third party addons that show questing areas.  I did not get as much into the story as I would have liked but the parts I saw seemed to be interesting. Even after playing only an hour and a half of my Charr warrior, I can say without a doubt this will be  my main at release.

My second time playing the game was with Jim, Brian, and Opie. We all created new characters and started fresh. This time I chose a Human Necromancer. The Necromancer played similar to a shadow priest in WoW with the exception of having a permanent pet. Again changing weapons changed the abilities and spells I was using. This is a nice way to give players more choice in how even characters of the same class are played. The four of us went around and completed the first 8 or so levels in the Human starting area. 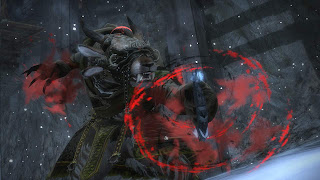 The party system worked with out a problem and getting to the same area as the rest of the party, via the way-points, was easy. The only problem we had was getting put on to separate overflow servers right as we were about to start playing. We finally were able to get back together but hopefully that was only a minor beta problem.

All in all, this beta has only served to make me more excited about the release of the game (whenever that is) and I look forward to seeing more of the story when it comes.