Another week, another streamer.  This week, I've been watching a lot of Paladrima's streams which have featured him attempting a Zelda:  Ocarina of Time Glitchless Speedrun and the occasional race. This guy knows his way around Zelda:  OoT and it shows.

I'll break up this streamer's broadcast into categories as usual...

Genre - The types of games they play.

Play Style - This is as it says, the style in which they play the game, whether they're Speedrunners, Professional, Casual, etc...

Typical Stream Time - The time of day I usually see the stream on.  It can vary obviously, but I'll do my best to give you a general idea.

Sound Quality - Again, broken down on the same scale of 1-10.

Stream Layout - This section will detail how each item on the stream is laid (video of the game itself, video of the player, timers, etc...).  This will be on a scale of 1-10 with a screenshot of the layout (if available).

Streamer - This section will explain a little about the person streaming, their tenancies (ex. how they react to dying in game) and how well (via mic, chat, etc...) they interact with those watching.  This will be rated on a scale of 1-10 as well.

Additional Information - I'll provide links to the streamer's channel, web site, Twitter, Facebook or any other information I can find about the streamer online.


With that out of the way, we move onward!

Video Quality (10/10):  Very high quality stream.  This is pretty rare to find someone streaming Zelda: OoT at such a high quality.  Never blurry, never jumpy.  Gotta give this a 10.

Sound Quality (8/10):   You can clearly her the broadcaster's voice, however, the game music is a little too quiet for my liking, but is clear.

Stream Layout (9/10):  Game screen, as it should, takes up a majority of the broadcast screen.  His timer is on the left hand side, out of the way and easy to read.  Could use some icons on the timer for looks, but other then that, great layout... 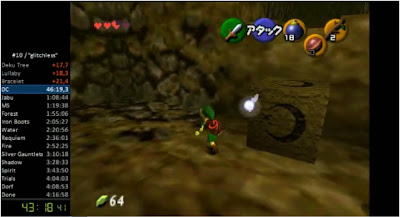 Streamer (9/10):  As Paladrima is doing something very specific (not many people run OoT Glitchless) it's nice that he is willing to explain what he is doing so often.  He answers all questions and is easy to understand.  Wouldn't turn up the game music when I and others asked him to, but no big deal really.  He has a pretty regular group of people who watch his stream which makes for a pretty entertaining chatroom.  With skilled play and great personality, Paladrima is a great watch.

That's all the information I have on Paladrima for now.  If you have time, check him out and click that Follow button.
Posted by Opie at 2:16 PM