About 4 years ago, I stumbled upon the web site for Speed Demos Archive while attempting to find gameplay footage for a game I played in the past.  What I really found was a web site holding several hundred "Speedruns" for many of my favorite games.  Megaman, Final Fantasy, even games like Resident Evil and Gears of War were in the list.  After watching a bunch of runs I was running out of new material (even though they do post 2-3 new runs every couple of weeks) and started looking for more.  That is when I discovered live streaming.

But it's not only Speedruns that you can find people streaming online, competitive gaming has really benefited from this rise in live streaming.  You can now find several top players streaming anything from coaching sessions to tournaments half-way across the world.

The problem with this sudden increase in live streaming is that anyone can do it.  This leads to a seemingly never ending search for streams that are not only entertaining but perform at a high enough quality that even make it worth watching.  Internet speed, screen layout, sound quality, even the broadcaster themselves play into what makes a quality stream.  Now, picking what you'd like to watch someone stream is up to you but I'm here to let you know streamers are putting out something worth watching.

I'll break up each streamers broadcast into categories...

Genre - The types of games they play.

Play Style - This is as it says, the style in which they play the game, whether they're Speedrunners, Professional, Casual, etc...

Typical Stream Time - The time of day I usually see the stream on.  It can vary obviously, but I'll do my best to give you a general idea.

Sound Quality - Again, broken down on the same scale of 1-10.

Stream Layout - This section will detail how each item on the stream is laid (video of the game itself, video of the player, timers, etc...).  This will be on a scale of 1-10 with a screenshot of the layout (if available).

Streamer - This section will explain a little about the person streaming, their tenancies (ex. how they react to dying in game), and how well (via mic, chat, etc...) those watching.  This will be rated on a scale of 1-10 as well.

Additional Information - I'll provide links to the streamer's web site, Twitter, Facebook or any other information I can fine about the streamer online.

My first streamer of the week is Bablo.

Stream Layout (9/10):  The game broadcast takes up a majority of the screen, as it should.  The timer on the right side is large enough to be read clearly without being in the way.  No unnecessary .gifs or icons taking up screen space. 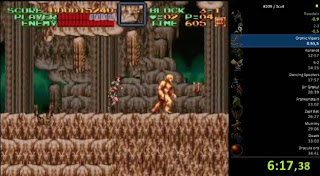 Streamer (10/10): Bablo, is my idea of the perfect streamer.  He lets the game do most of the talking meaning that the game sound and the game video are center stage.  No awkward streaming video of him playing down in the corner, no screaming in the mic when he dies (which I'd never be able to do).

When he is talking, he's answering questions or explaining why he did or didn't do a certain thing in the game he is playing.  He's very well spoken, easy to understand.  He must have answered the "Where are you from?" question a dozen times (which has to be annoying) but answered it like it was the first time he was asked each time (he's from Finland if you're curious).

While I've been watching him this week, he's been attempting to beat the current world record for Castlevania IV for SNES which he just did with a time of ~34 minutes as I'm typing this (after 230+ attempts). Overall a great personality which makes watching his broadcast much more enjoyable.

So when you have time, head over to Bablo's stream and follow him.  Once you follow on Twitch, you'll be notified when any of his broadcasts go live.  Enjoy!
Posted by Opie at 2:43 PM