Back in the day, your only options for sports games were not so limited like they are today.  Now you pretty much have the base franchise games, NHL XX, Madden, Backyard Whatever, and anything else EA can churn out before a new season starts.  There was a time when EA put thought into a game and made it fun.  There was also a time when developers other then EA and 2K made sports games.  In this post, I'll bring you back to a time where sports games where fun, creative and had some level of replay value rather then being your standard cookie cutter sports game.  Coach Bricka demands you join him!

In honor of Coach Bricka coach of the Galaxy Aces (who is featured above), we'll start with Mutant League Hockey. This was one of my favorite games to rent as a child. This was a game released on Sega Genesis and featured a bunch of skeletons, robots and trolls playing "hockey". What really ended up happening was using chainsaws, bats, chains and sometimes, even your fists to kill the other team and occasionally score goals.  The violence in this game was fantastic.  It really made it feel like a hockey game.

Everything from the team names like the Mighty Weenies (a spoof of the Mighty Ducks) and the Lizard Kingz (spoof of the LA Kings) to the dialogue was hilarious.  There was also a Mutant League Football game and even a cartoon based off of the video games.  Easily one of my favorite sports games of all time.  It is also interesting to note that this game was developed by EA which is a surprising considering they're trying to be so family friendly these days.

Another favorite of mine, also featured on the Genesis was Joe Montana Sports Talk Football.  It's "A Beauty!". Despite the fact you could run the Half-Back Pass play and score a touchdown almost every time, I still loved it. The voices were great and the graphics were pretty good for it's time. This has to be one of the first sports games to feature some real play by play.  Everything from counting the yard lines while running up the field to commenting on your kickoff, the game was totally high-tech with over 500 different phrases.  Better commentary then Madden himself in my opinion. 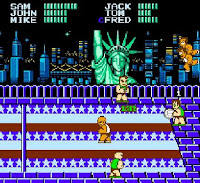 Going back in the 8-Bit era, there was game that was not really an official sport, but was great just the same, Super Dodge Ball. The game featured characters from River City Ransom and was exactly what you'd expect, chucking balls at the other team trying to hurt them as much as possible.  The game was (and still is) insanely fun (and extremely difficult at times) to play.  Nothing was more satisfying then drilling someone in the head and knocking them across the screen in defeat.  If you get the chance, it's a highly recommend buy. Also, for a game whose initial release was in  Japan, the game was strangely patriotic... 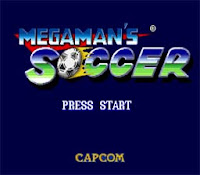 Jumping back into 16-Bit land, we take a look at a little known game by the name of Mega Man Soccer. The controls for this game were so terrible, but I couldn't get enough. Rather then allowing you to switch which player you're controlling like in any other sports game, the game would switch for you. This wasn't really a problem until you tried to play with someone. There was nothing more frustrating then when your friend would try to send you a pass up field and the game would switch control of that 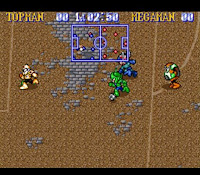 player away from you and back to the original passer. There was also no real way to tell what character you had selected.  If you were off the main viewable screen, you had to depend on the mini-map at the bottom to tell you where you were, then once you figured it out, it'd change on you again! Oh the frustration, but I have so much love for this game. Playing against of the Mega Man characters to build your team was great.  Ice Man in goal, Skull Man in the mid-field, good times... 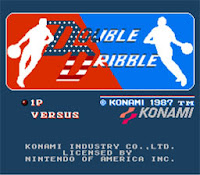 I'm not a Basket Ball fan by any means, but I did grow up in the time of Michael Jordan, Larry Bird, etc... so in my younger years, I did own a few Basket Ball games. My favorite was Double Dribble on the NES. The game definitely isn't pretty, but it has the most epic "cut-scene" in any game of that time. Any time you went up for a dunk, it would cut away to a shot of you dunking in slow 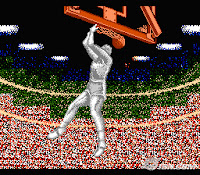 motion. Oh yeah, it was awesome. Playing against a friend, going up for a dunk and getting the cut scene and rubbing it in their face while it's happening, there was nothing better then that.  It is strange to think of Konami making such a great sports game, but they also made games like Track and Field and my personal favorite hockey game of all time, Blades of Steel.

The late 80s into the mid 90s was truly a great time for sports video games. There are several others I played that I could go on and on about, Ice Hockey, Hit the Ice, NBA Jam, Tecmo Bowl, etc... but I wanted to highlight some of the lesser known games I felt brought a creative aspect to the sports genre. We can only hope that in the future, we see developers revisit the idea of the sports video game and try to approach it with the idea of re-playability in mind and not just turn out a re-hashed version of last years game.